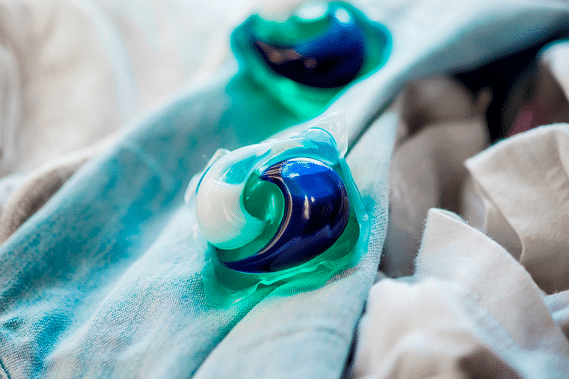 Last weekend, I got a bee in my bonnet and decided that the house needed to be more ordered. As well as the usual washing of bed sheets, school clothes and miscellaneous, I vowed that the perpetually full washing basket would be completely emptied and, what's more, we would pack away all of our summer clothes and unpack the winters one. As it turned out, the packed away clothes and bedding came out of storage smelling musty and so began my weekend of chain washing.

I don't enjoy washing, or any kind of housework, if I'm honest. I, like most of the population, prefer making a mess to clearing it up but, ahhh, it's a great feeling of satisfaction now it's all done!

One thing that kept the endless loads of washing from defeating me was a box of Ariel 3in1 pods we'd been sent for review. They're billed as 'Ariel's most concentrated cleaning power yet' and that's a good thing, seeing as I'm also told that a typical load can contain up to 40 grams of dirt. Ew.

As you can see from the pic above, the pods are bit different. This is because the science-y people at Ariel figured out that by keeping the three liquids separate until they reach the wash, you get the cleaning benefits of each section (stain removal, whitening/brightening, and care) in a way that you couldn't if they were all mixed together to begin with.

I've never used any kind of pod  before so the convenience was a bit of a revelation. I also noticed that, because it's a pre-measured dose, my 16 pod pack actually did 16 washes, instead of doing far less because I got pour-happy, which is what happens with my usual liquid.

They cleaned really well and the laundry came out smelling fresh and clean. The quality of the wash was definitely superior to our usual choice of supermarket concentrated liquid.

It handled the usual grimy school jumper sleeves and shirt collars well, but failed to get the poster paint out of Miss J's t-shirt after a mammoth painting session. The only other issue I had was that, on a couple of occasions, the outer skin failed to dissolve entirely and got caught between the door and the rubber seal. Not a big issue, though, as it was easily wiped away and there wasn't a trace of the pod on the clean clothes.

We don't normally use biological cleaners as we all have eczema-prone skin, but so far, so good. As a real testament to the quality of the product, it's worth adding that I've just bought another box (38 washes for £9) - this time hopefully it will last us a bit longer than a weekend!

We were sent a large box of Ariel 3in1 Pods for review. Image via Ariel.