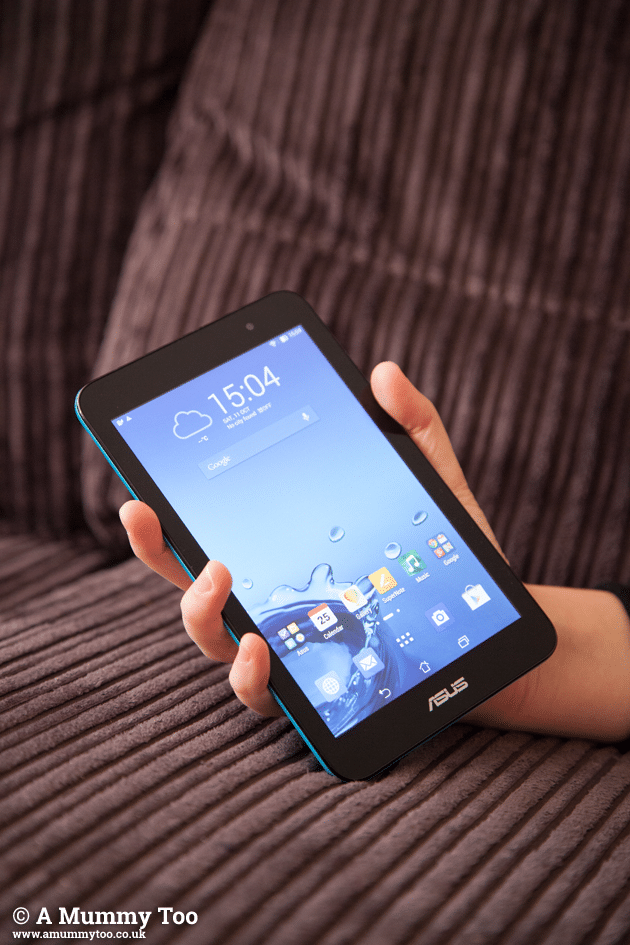 For the last couple of months, we’ve been road-testing the ASUS MeMO Pad 7, which sits in the category of mid-spec tablet with a low RRP – in this case £120 (similar to the Tesco Hudl2) but it’s listed with some retailers this Christmas at under £100.

So, down to the nitty gritty. Like the Hudl2, the Memo Pad 7 comes in a range of colour options (white, red, yellow, aqua and black), this time all with a metallic look. 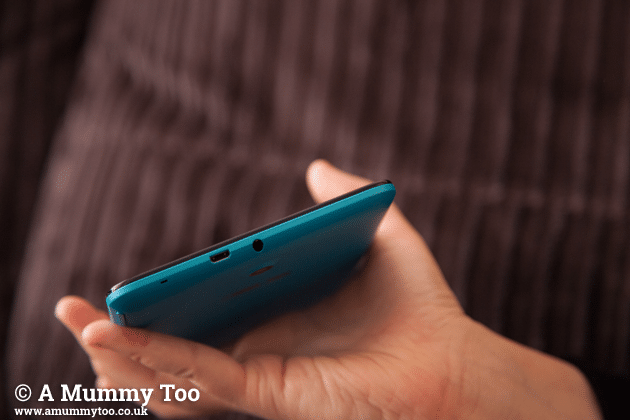 It’s 7-inches diagonally, measures 192mm tall by 110mm wide with a very thin depth of 10.7 mm. It’s also lightweight at 295g, so overall it’s small and light enough to fit in a handbag or large pocket, which is great fun but frankly a bit too tiny to do any real work on. The backing is sleek, rather than rubber grip, so it feels nice but isn’t as easy to hold as its competitors. 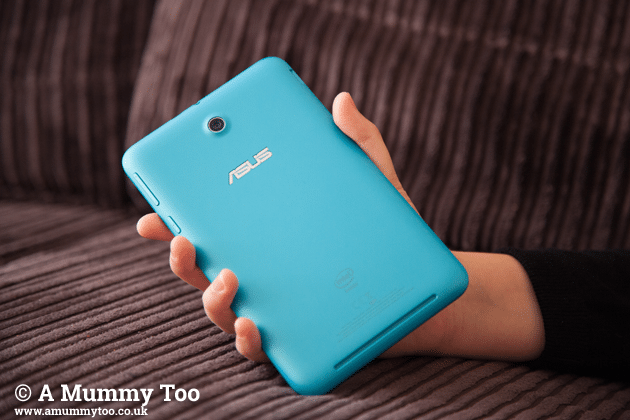 If you plan to use it a lot, it’s worth investing in the matching MagSmart Cover (around £25) which comes in a range of complimentary colours and protects the tablet while offering better grip and a fold-out stand, which is handy if you’re propping it up to watch a video on the sofa or in bed, or as a recipe stand in the kitchen.

Let’s talk about the image quality: the ASUS MeMO Pad 7 has a 1280×800 pixel HD display and a nice wide 170-degree wide viewing angle with fairly strong colour reproduction. The pixels are not amazing (the Hudl2 has an 8.3 inch screen and 1920×1200) but it’s a far from unpleasant experience to cosy round the screen and enjoy a movie, especially as the stereo speakers pack a decent punch and are aligned specifically to direct outwards and toward the viewer. Just make sure the screen is clean – it’s reflective and fingerprints show up really badly.

For those not keen on the idea of huddling round a 7-inch tablet, the Memo Pad 7 also has Miracast, a feature which enables you to share the content wirelessly to your TV screen. Enlarging YouTube clips from the tablet straight onto your television is a real treat when keeping the children and visitors entertained, although it’s not without flaws and occasionally hangs endlessly rather than connecting.

Under the hood, there’s a 64-bit 1.86 GHz Intel Atom Quad-core processor with 1GB RAM, which delivers pretty decent performance, and the ASUS ZenUI improves on the previous ASUS tablet interface with around 200 subtle upgrades and enhancements on top of the standard Android operating system. Despite those laptop level processor specs, I didn’t find it as cosy or smooth to use as the Hudl2, but it’s not bad at al, especially if you’re paying sub-£100.

Power-wise, the MeMo Pad 7 has a long-lasting battery: up to 10 hours, depending on your usage. It performed well in our tests under relatively heavy family usage.

The camera is always the weak point for entry-level tablets, but the MeMo Pad 7’s cameras (rear 5MP / 2MP with auto-focus and front 2MP / 0.3MP) are functional enough to use for Skype or quick family snaps, as long as you have decent lighting. A little bonus on this tablet is Time Re-Wind, which allows you to scroll a video backwards and pause it to capture the perfect still image. It’s not sharp enough to be of professional use, but it’s fun for the kids to play with.

There are some other useful new functions that come with this release, although for the most part they’re what you’d expect from an Android device. For examples, What’s Next keeps you informed of what’s coming up (with weather warnings, chronological calendar alerts of your upcoming events, etc – all displayed in your home screen) and Do It Later lets you store different tasks to come back to another time (email drafts, paused YouTube videos, half-read articles). This is handy if you, like me, are often interrupted mid-task by calls, texts, or little ones demanding lunch.

Overall, the ASUS MeMO Pad 7 is a streamlined package at a reasonable price. It’s not the sharpest screen, fastest processor or smoothest UI on the market, it’s not as pretty as many of its competitors, and I couldn’t imagine trying to work on it in any serious capacity, but at such a low price, it’s still a perfectly valid contender for a round-the-house tablet or occasional-productivity-on-the-go solution.

We were sent the tablet for review.