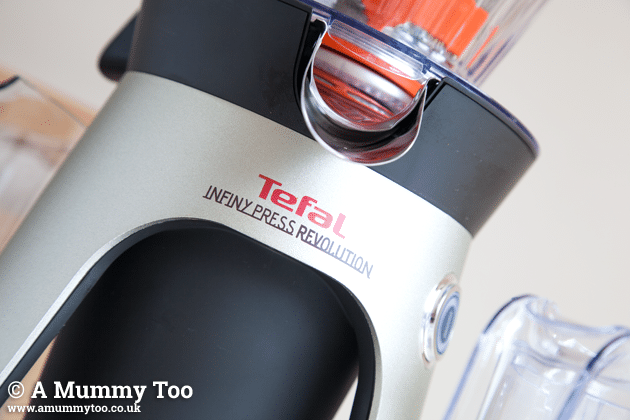 This is the Tefal Infiny Press Revolution (RRP £199.99) and it promises to bring juicing perfection to your kitchen.

To test ours for the first time, I decided to make a blend of different textures, combining three small apples, which didn't need to be cored or peeled, just chopped small enough to fit in the funnel, strawberries, which went in as they were, two small carrots, which I peeled a little for hygiene, and 1 large orange, which had to peeled and divided into segments. 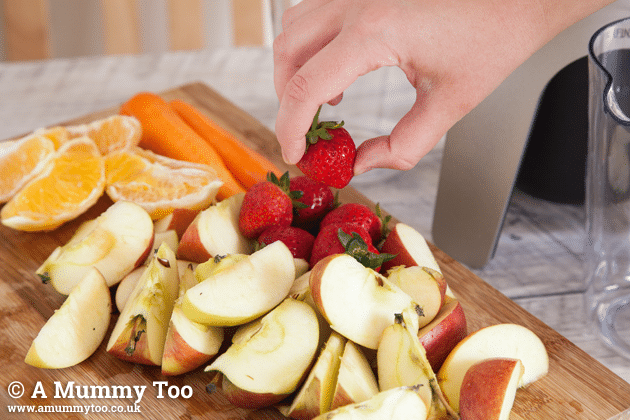 The instructions recommend you alternate between feeding in juicer fruit like the strawberries and orange, and pulpier fruit and veg like the apples and carrots so this is what we did, dropping them in turn through the three tubes at the top of the juicer.

It's really not a noisy machine. I was expecting to disturb the whole house, but its significantly quieter than either of my blenders. 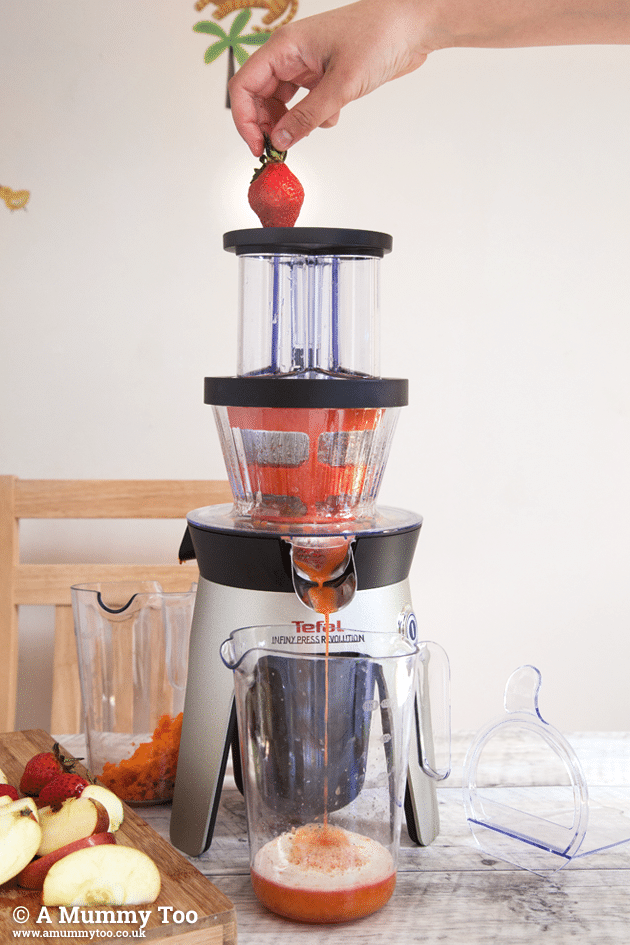 As you push the fruit and veg through, the blades make light work of it all, with the liquid seeping through the fine mesh and out the spout at the front, which the pulp is extruded into the second jug at the side.

I found the if you go too fast at this stage and have all three tubes being filled almost constantly, it can cause a little leakage from underneath the spout, but you quickly get a sense of what speed it can cope with and on second use I had no problems at all.

If any heavier parts fail to pass through the blades on their own, there's a plunger which pushes them through with very little pressure.

When you've finished juicing, you can tilt the spout upwards to prevent any mess from last drips. 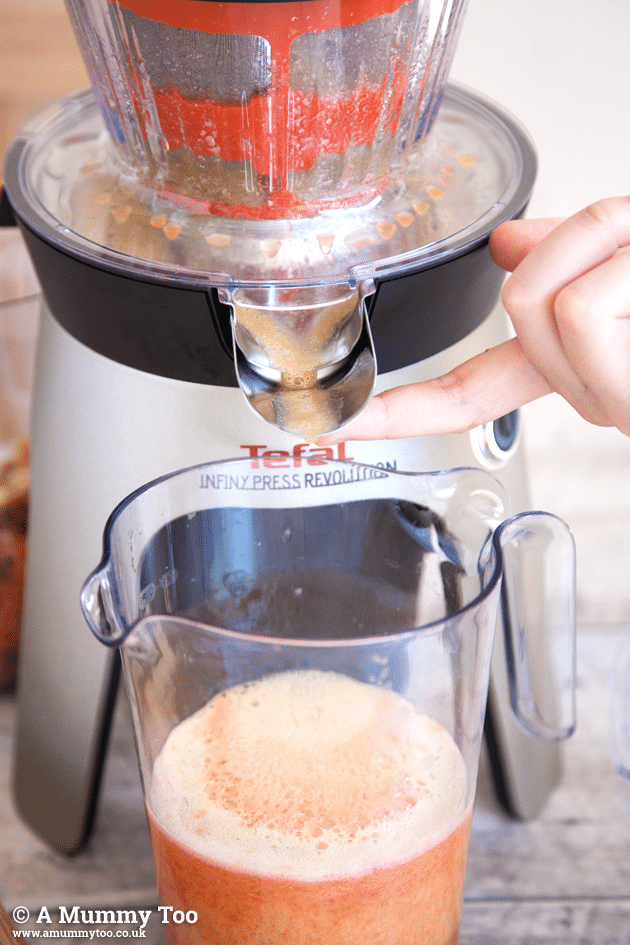 Here's the finished juice. We got about 400ml in total. If you're keen to know how it stacks up with other juicers, the makers say that compared to a standard juicer the Infiny Press gives you 30% more juice, 35% more vitamin C and 75% more antioxidants, depending of course on what you're juicing. 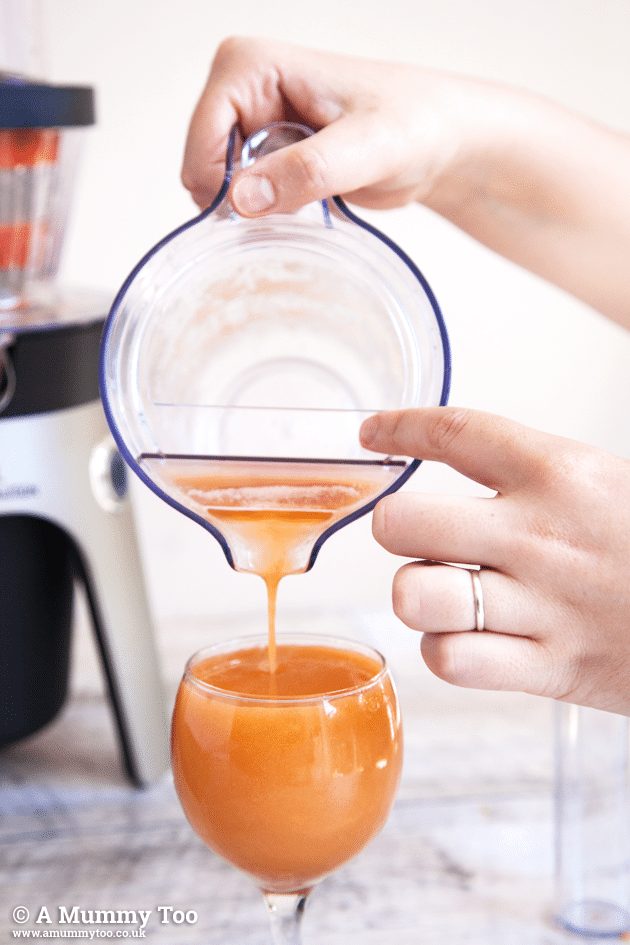 To pour, I put the foam separator attachment on, which does a pretty good job of keeping the froth out of the glass.

The resulting liquid was a really delicious, thick and ultra sweet juice that verged on being a syrup. The flavour was primarily apple, while some of the texture from the carrot came through, but not to an unpleasant degree.

It's worth noting that the juice comes out at room temperature, as you'd expect, but chilling it wouldn't be a great idea as apparently, to get the maximum health benefits, you should drink your juice within 15 minutes, so I'd recommend you add a little ice to cool it fast and then drink it all up.

This is what was left as waste from that board full of fruit and veg - a pretty small quantity really! 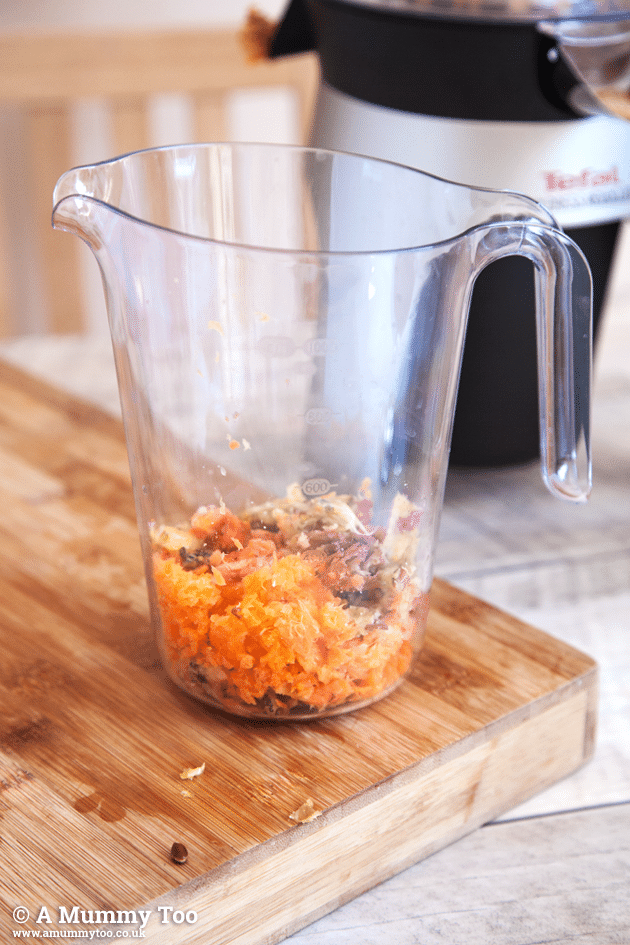 When you're done, it's just a case of unplugging the machine, dismantling, and then rinsing the removable parts under warm water. So far, I have found that only the filter needs a little scrub with a washing up brush to release the pulpiest bits, then I just leave everything on the draining board to dry.

It's no hassle at all and fits neatly at the back of the counter or in the cupboard when not in use.

Overall, I'm really impressed with the Tefal Infinity Juicer and will definitely be using it again in future. I'm quite keen on the idea of making detox blends with ginger and green tea - that sounds amazing.

Win a Tefal Infinity Juicer for yourself

Tefal is currently running a giveaway and you could be in with a chance.

Just watch the video below and then answer a question about what you saw using the widget.

The giveaway closes this Wednesday so hurry!

We were sent the juicer for review