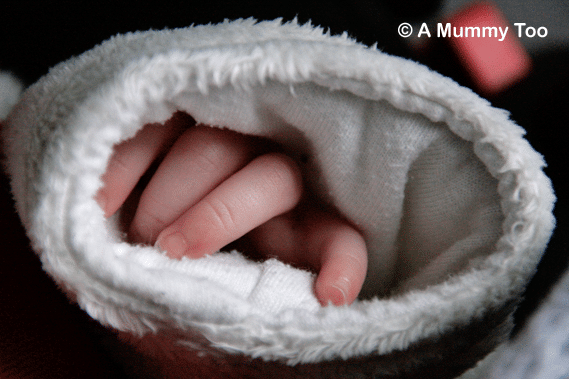 After sulking my way through the final weeks of pregnancy, things finally started four days before my due date.

I’d had contractions since 7pm that evening, but with some false alarms punctuating the preceding days, I didn’t believe I was in labour. By midnight, the contractions had stopped and we went to bed frustrated and disappointed.

I woke up at 3am with a stronger contraction and as I got up to go to the loo, my waters broke. It was really happening!

I squeaked and shook Mark awake – I was shaking with a mixture of nerves and excitement. Mark and I stood giggling in our bedroom, gathering together the last few bits for my hospital bag and trying not to wake JD who was snoring quietly in the next room.

Mark wanted to call a taxi straight away but the contractions, although only four minutes apart, weren’t yet agonising so I was determined that we wouldn’t do anything until mum was here and I’d given JD a goodbye cuddle. I didn’t want to be rushed. A little bit of fear was setting in and I wanted to give my beautiful boy a hug.

I called my mum – she’d be round in five minutes. I whizzed about getting washed and changed. Mum arrived and we called the taxi. It was supposed to arrive in 15 minutes – about 3.40am.

I crept into JD’s room and gently stroked his hair. He woke up and smiled at me. I kissed him and explained softly that his grandma was here and I was going to hospital with Mark to have the baby. He smiled brightly, asked a few very sensible (and hard to answer) questions about what would happen. I gave him a hug (as best I could over my huge bump) and promised I’d see him in the morning.

So there Mark and I stood, on the street outside our house at 3.40am, listening to the village silence and whispering like wayward teenagers. I don’t think I’d been outside in the early hours since JD was born. With the cold air hitting my lungs and Mark’s arm around my shoulders, it felt more like the end of a night out than the start of labour.

4am and the taxi hadn’t arrived! By this time I was getting cold and the contractions were getting strong enough to double me over with very little break between them. I was in terrible pain and Mark was geting worried but I couldn’t stop laughing. The pain combined with nerves I guess.

Mark call the taxi firm who revealed they’d be another 15 minutes! Mark explained I was in labour and got a satisfying, “flipping heck!” reaction from the man on the other end of the line. Five minutes later, a lovely taxi driver arrived and got us to the hospital in ten minutes without speeding.

4.15am and we were buzzing our way into the maternity ward. We hadn’t had a look round beforehand and I hadn’t paid much attention to the signs when we’d had prenatal checks, so we got a bit lost. I’d calmed down in the taxi but waddling around the maze-like hospital, intermittently doubling over in agony, set me off on a fit of giggles again. Yes, I know, weird.

Very soon after, we found our way on to the ward and were shown to a lovely room. With JD, a tough birth story I’ll share another time, I spent all but the last few minutes of labour on a public ward. The sight of a clean bed and bathroom to myself brought on some relieved tears. The midwives were all amazing and I felt positive and ready to deal with whatever happened next.

By 5am the pain was almost impossible bear but I spoke with the midwife and agreed to stick things out until 6am, at which time she’d check how far I was dilated and we’d go from there. I wanted to go without pain meds if I could.

A test of (Mark’s) strength

I coped with contractions for that hour by walking away from and back to Mark. I’d pace away from him as a contraction subsided and when I made it to the wall, pace back and collapse into his arms as the pain kicked in full strength. I put my whole weight over his outstretched arm at the peak of each contraction – good job he’s strong!

At 6am, as the midwife returned as promised, I was vomiting – a good sign, she said. As she checked me over it was hard not to writhe in pain. I’d stayed positive until that moment, but then she broke the news that I was only 3cm dilated. I burst into tears and told Mark I couldn’t do it, I was going to need pain killers.

My midwife agreed that pethidine was the way to go, but it would take an hour to arrive, so she passed me the gas and air. I’d given up on pacing by then, and stayed on the bed, clutching Mark’s hand and breathing the gas slowly. At one stage, I breathed in too much and the room took out a loud, pulsing buzz for a few seconds – scary.

During that hour, they fitted a heart monitor as they were concerned Little Miss J might be too small. The panic that news set off in my head made that hour seem like five. Mark and I told each other it would all be ok. And it was! The results were all good – she was doing fine.

At 7am, the midwife confirmed I still hadn’t dilated much and gave me the pethidine. The pain was so overwhelming by then, I didn’t really know what was going on. All I was aware of was Mark’s hand, the rail of the bed I was gripping it against, and the sound of his voice, telling me that I was “doing amazingly” and that, “everything is going to be ok”. I’m so grateful to him for that.

The pethidine kicked in quickly and I don’t have much recollection of the hour that followed, other than that the pain didn’t feel reduced, but I was calmer. While I writhed in my own little world of pain and pethidine, there was a shift change and two new midwives introduced themselves.

As they discussed the plan for managing me, I suddenly felt the urge to push. I must have been quite drunk on those pain meds as apparently Mark and the midwives had to tell me six times that the baby was crowning before it registered. I thought I’d remember what it felt like, but turns out I’d forgotten. One word: OW!

According to my medical notes, this stage of labour lasted a whopping seven minutes! With JD, I’d pushed for 45 minutes. With Little Miss J, I mostly breathed through it, with only two active pushes for the head and one for the body.

She was delivered onto my stomach at 8.22am and Mark cut the cord. “It’s a girl, right?” I asked. Mark nodded happily. The sonographer at our five month scan hadn’t been able to confirm the sex, but I’d been sure from the start that we were having a girl. I could feel my cheeks turning hot with pride. I just gave birth to our daughter!

I looked down at this incredibly beautiful little bundle and felt deliriously happy. Little Miss J amazed my by starting to wriggle up my stomach, reaching out a hand in search of a feed. I took her to my breast and she fed immediately. I felt so proud as I kissed my wonderful husband and we looked down at our new, perfect daughter.