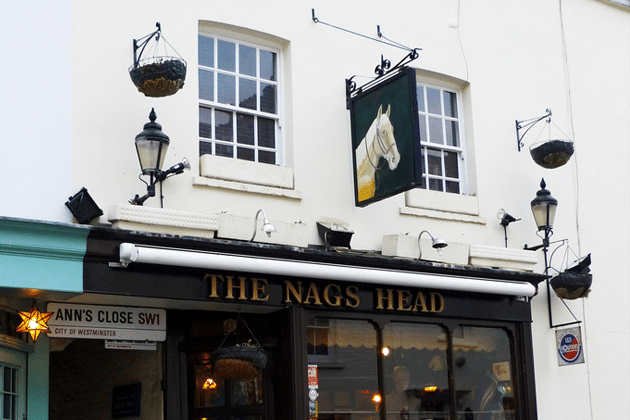 A visit to London wouldn’t be the same without visiting one of the city’s many historic pubs. They are as much a part of the scenery as The London Eye or The Shard. InterContinental London Park Lane is well located in the heart of London’s Mayfair district, and is lucky enough to be surrounded by some of the finest establishments in town. Nothing beats heading to the local for a pint or two, but sometimes you are searching for something with a bit of a twist, something a bit further afield. Below is a list of six of the best, most historic pubs in London.

An inn has been on the site of The Guinea since 1423, making it London’s oldest serving pub. It was a firm favourite with the servants and stable hands to the wealthy families of Berkeley Square. These days the clientele and menu are a touch more refined, the pub has earned numerous awards for its fine steak grill and pies.

The Nag’s head is an eccentric little pub, at odds with the multimillion apartments, Ferraris and world-famous department stores that inhabit Knightsbridge. The landlord, who has as much character as the pub itself, has a strong dislike for mobile phones, so be sure to keep them pocketed. Don’t worry though you won’t be bored as the 300-year-old walls and ceilings are covered with artefacts and keepsakes.

Ye Grapes or The Market Tavern

Shepherd Market is tucked unassumingly between Piccadilly and Curzon Street. The market has some nice shops, eateries and pubs, but these two stand out as the best of a great bunch. Ye Grapes dates back to 1882 and has sadly become a bit of a tourist trap. Not to fear, The Market Tavern provides a true London drinking experience. Friday nights are the best time to lap up the experience, at 6pm to be precise when all the offices have closed for the weekend. The suits welcome the weekend in with a drink or two of their favourite tipple and a meal from the ultra-modern menu.

The Ship has sat on the banks of the Thames since 1786, formerly known as The Thameside Waterman’s Inn. This pub is perfect come rain or shine. Sitting outside overlooking the river is as much an experience as settling in around the open hearth. The food suits the weather with an al fresco barbecue served come shine and a charmingly hearty menu for when the weather is less than shiny. A popular haunt, especially on the weekend; so don’t be surprised by a bit of a queue at the bar.

The youngest entry in our list was only opened last year. The Bull forces its way onto our list with the promise of “a great public house for the enjoyment of the local community.” This pub is a beer enthusiast’s heaven. A microbrewery has been installed, called The London Brewing Company. Steve Grey, head brewer, is renowned amongst the brewing community for his beer and brewing events.

This quietly unassuming pub has been around since the mid-1500s, and has an outstanding history to show for it. The pub was licensed in a town in Cambridge because it was on land owned by the Bishops of Ely. That has since changed and now finally falls under the jurisdiction of London. Previous clientele include Queen Elizabeth I, who is said to have danced around the cherry tree outside, and Brad Pitt. Some say they were attracted by what Eaman, the landlord, describes as English tapas; that is pork pies, scotch eggs and toasted sandwiches. Take note that this pub is only open from Monday to Friday (excluding Bank Holidays.)

These pubs are surely some of the best that London has to offer. But there are undoubtedly many more hidden gems to discover. Let us know yours in the comments below!