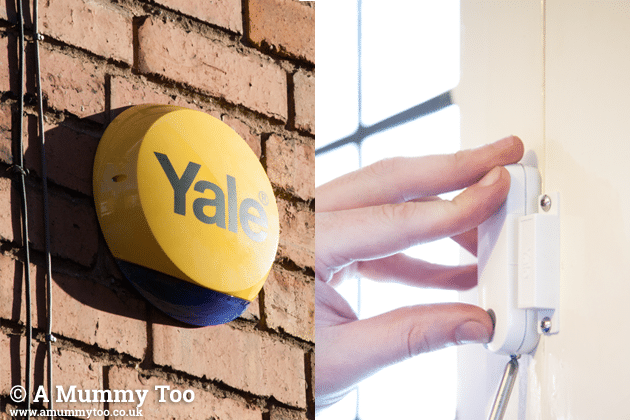 As the nights are drawing in, we’re putting on the sparkles and heading out into the night for all sorts of festive celebrations. As the song goes “it’s the most wonderful time of the year”. The problem is, it’s also the most wonderful time of the year for criminals. Reports show a 20% increase in home burglaries during the darker months. And considering £1,746 is the average cost of a winter burglary, we’d all rather just avoid it altogether.

Yale have released their new Easy Fit Standard Alarm, which retails for around £220 is perfect for a flat, terraced, or semi-detached home. 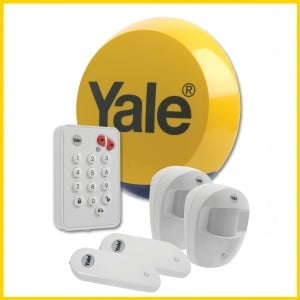 We’ve just installed one in our own home. Here’s how we got on.

The first step was unpacking all the components and activating the batteries (by pulling out the tiny slip from each gadget). I was able to then test the power to the PIR Movement Detector and both door contacts, as they all showed a small light when pressed.

Next, we had to choose a position on an exterior wall to mount the bright yellow siren. It’s a tiny bit of an eyesore, admittedly, but that’s the point – the very sight of the bright yellow box is designed to put most burglars off from even trying to get in.

A reasonably tall ladder, a powerdrill drill, help from Mark’s brother C, and a small amount of swearing (an inevitability whenever we attempt DIY) and we were on our way.

You screw the mountboard to the wall first. All screws and rawlplugs are included. If your building is anything other than standard red brick, it’s wise to research your building’s surface and its suitability before drilling into it. Equally, if you’re renting, you might need permission from the landlord before going ahead.

Keep in mind when mounting the siren that it needs to be high enough so that a would be burglar can’t attack it too easily, but having said that, there is a tamper switch built inside, so if it is ripped from the wall, it should trigger the alarm.

Once the mountboard was in place, the next step was to fully depress the tamper switch, switch the siren to the ”on” position and screw the cover into place – all the screws you need are provided.

Now, at this point if you haven’t read the instructions cover to cover before mounting the siren, you may make the mistake of heading inside for a cuppa. Beware! Once installed on the outside wall, the siren is in “learn mode” on a three hour countdown.

We worked against the clock to get the rest of the set-up done in this time, which turned out to be ample. With Mark and C working on it together, the whole thing took under an hour.

When choosing mounting locations around the house for the two PIR detectors and two door contacts, Yale suggests you test all the different components can actually receive the system radio transmissions. This is a simple enough process of pressing the test buttons and waiting for a light or a beep. Note: the beep comes from the main siren outside, not the devices themselves.

When we were satisfied with our chosen spots for every location, we marked them on the wall. At this point, it was time for more drilling and fitting, but it was relatively straight forward.

Once everything was mounted, we used the supplied keypad to disarm the alarm and pressed the default PIN (which is 0000). The siren beeped twice, telling us we’d installed everything and the system components were all talking to each other correctly.

Next, we set our own system PIN, which was a pretty simple procedure, but may need to be done twice if you’re not swift between the stages. The keypad then enables you to set or unset the alarm via this access code.

And that’s it: we were all done.

Living with the alarm

The Yale Easy Fit Standard system is pre-set with a 20 second exit/entry period, allowing your entire property to be either armed or disarmed.

This means, when heading out and setting the alarm, you’ll need to have the kids out the door first, as you only have 20 seconds to race out and close the door behind you all. Any last minute hunts for book bags once you’ve set the alarm will make you very unpopular with the neighbours.

Equally, the swift entry process could take some getting used to for the whole family, and remembering to turn it off when you come down bleary eyed in the morning is a skill we’re having to master quickly, although it’s well worth it for the peace of mind.

We’re really happy with the Yale Easy Fit Standard Alarm. It was relatively easy to install, does what it’s supposed to do and comes with a 2 year guarantee.

A possible downside is that there are only two PIR movement detectors, but on the plus-side, if you want to cover every room in your house, you can purchase additional detectors for around £25 each and they’ll work in harmony with the main system, which can cope with up to 30 devices in total.

Yale have provided some tips for safety during the winter months.

We were sent the system for review.