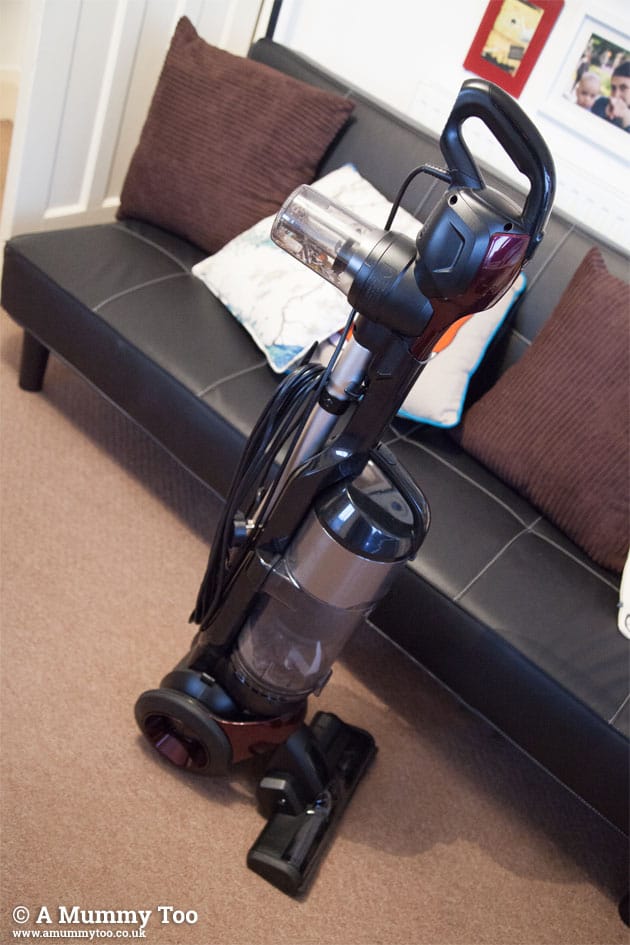 After a fun, exciting and relaxing Christmas break, filled with games, craft activities, snacking galore and even the odd plant-knocking-over incident, we’ve had plenty of chances to put the Samsung VU700 Motion Sync 2 in 1 through its paces.

To recap, the key features I picked out in my first-impressions post were:

For the most part, those are still the features I’d highlight as the key strengths, so do read the original post to get a sense of those. Now, on with the real life testing…

I feel that the main body upright Samsung Motion Sync 2 in 1 is good. As I’d hoped, I’ve become used to the extra weight in comparison to a cylinder vacuum and I’m finding it easy to use. The handle height is good (no hunch-back vacuuming to be seen with this model) and the ball-type hinge means it slides round corners and under chairs comfortably. However, it is a bit clunky if you want to change angle considerably, and I tend to lift the whole body to do so.

With our relatively flat carpets, we’ve learned that the vacuum doesn’t really work well on the carpet setting, leaving quite a lot of visible debris in its wake, but it does a great job if we lower the brush wheel, the function designed for hard floors. In this mode, it slightly lifts the well-trodden pile and picks up dust and craft debris with ease. Looking in the dustbin right now (check out the top pic, I’ve left it un-emptied so that you can see), it’s even sucked up some fairly length strips of torn paper and a couple of small plastic toys, so no complaints there.

It’s considerably noisier with the brush down, but the carpets look refreshed and clean and I’ve had fewer allergy breakouts, so I feel it’s helping with the overall dust levels in our home.

It’s super effective in the kitchen on the vinyl floor, and I feel like I can throw out our broom.

We’ve used the detachable mainly for cleaning around the edges of the carpets and above doorways, tackling cobwebs uncovered when I cleaned the cupboard tops, and clearing up errant sawdust on desks and in windowsill crevices after our home-office redecoration. For this, the freedom from the main body is very handy and it cleans dust well. In addition, the brush attachment that slides easily down into place is really handy for hard surfaces.

I have used it to clean the stairs and while it’s very light and convenient to be able to move around without the body, it only really picks up visible debris. I don’t feel like it’s really getting into the carpet fibres. For that sort of job, I miss the power of a cylinder vacuum. Even freshly spilled, dried rice crispies on the kitchen floor took more time to suck up that I’d expect. In my opinion, the detachable mini-vacuum does work, has a handy design, and will pick up bits and pieces of small debris as well as dust, but overall might not prove powerful enough for really messy family life.

After the first few uses, it became apparent that the detachable has a very narrow inlet between the hose and the dust chamber – about the size of the top section of my thumb – and this means it can get blocked more easily than I’d like.

Blockages from small bits of plastic, paper or tangled hair/cotton result in a partial loss of suction and render it less effective until you undo it and pick out the blockage by hand. When freshly cleaned and emptied, it can pick up small craft beads (I can’t be the only parent with Hama beads scattered everywhere) but a slightly sticky dried Cheerio at the edge of the carpet proves too much of a challenge for the handheld.

A niggle, though, is that if you don’t realise the handheld has become partially blocked and you suck up, say, the last tiny shards of some broken plant pot like we did, they will whizz up the hose and then, when you turn the power off, scatter back down over the floor. If you’re placing the detachable back into the body at the time with the motor still on, these little bits fall into the slot at the base of the main body when you’ve finished vacuuming, and the little bits of debris slowly build up in the body base so that eventually when you try to lock the hose back into place, it keeps releasing by itself when you’re trying to vacuum. Remember, the detachable forms the handle when you’re using the vacuum as an upright, so this is a pain.

It took me a minute to realise what was going on, then I had to use a knitting needle to lift out the bits stuck in the body before I could successfully click the detachable back into the body properly. I’ve had to do this twice since, so I’m learning to always turn the handheld off over the floor, to see what drops out, before reattaching it to the main body.

It might seem like I’m panning this vacuum, but I’m not. Most of the time I’ve used it without a hitch, it’s just those handheld niggles that let it down.

I love it as an upright, and if you could also somehow use the suction power of the main body in hose form when you need to, I think this would be a fine vacuum, but because you’re limited to either the full-size powerful main vacuum, or the small but weaker one, it’s not ideal for getting to grips with the grime that builds up around the edges of a young family’s home.

We were sent the Samsung Motion Sync 2-in-1 for review.