After a gorgeous first night at Animal Kingdom Lodge, we rose bright and early and drove out, past the lake to visit our first Walt Disney World theme park: Magic Kingdom.

Magic Kingdom was the first of the four theme parks to be built at Walt Disney World and is, I’m told, similar to Disneyland in California, with six themed lands: Main Street, USA, Adventureland, Frontierland, Liberty Square, New Fantasyland and Tomorrowland.

Each land has a distinct look and feel, which really adds to the feeling of scale and adventure. This is a land of fantasy and it grabs you and draws you in as soon as you arrive.

We met Anna and Elsa!

There will of course be very few parents with young children who aren’t acquainted with the Disney smash-hit Frozen. And for many kids, getting to meet Elsa and Anna is a high – if not the highest – priority on any Disney trip. Miss J was no exception. In fact, she was so excited, she got quite starstruck. It was lovely to see.

We met Elsa and Anna as part of a press breakfast, but if seeing them from a distance around the parks isn’t enough, you’ll need to book in a visit to the Princess Fairytale Hall.  As you can imagine, demand for this attraction is high and if it’s a not-to-be-missed stop on your schedule it’s worth getting a FastPass+ which lets you reserve access to select high-demand attractions and entertainment.

I couldn’t recommend FastPass+ more. Ours were so useful, and the service is included in the general ticket price so there’s nothing to lose and plenty to gain!

We hugged Mickey and Minnie!

Also at our breakfast, we met the boss of the park and his wife. Yep, Anna and Elsa might be the new hit stars of the park, but it would be just as hard to imagine visiting any Disney park and not meeting Mickey and Minnie. This was exciting good fun for all of us, and both superstar mice has plenty of smiles and hug for the kids.

If you want to meet the legendary mouse duo, they can be found at Magic Kingdom’s Town Square Theatre, which is beautifully decorated to a turn of the 20th century theme, displaying posters proclaiming ‘Master Magician, Mickey Mouse’ as star of the show.

One of the original attractions at Disney World when it opened in 1963, the Enchanted Tiki Room is still fun in 2015. It’s also a great choice if you’re sweltering in the sun and fancy a nice, air-conditioned show.

Four animatronic macaws sing bouncy, Caribbean songs, occasionally joined by other surprise elements in the room and then for the big finale they’re suddenly joined by dozens more birds. It’s a light, fun attraction, perfect for parents with younger children. We enjoyed watching it immensely.

This iconic piece if entertainment was designed by Walt Disney himself – his aim was to showcase harmony between cultures and it’s really quite something.

It was the first ride we went on at Magic Kingdom, and saw us clamber aboard little boats that sailed us slowly around a bright, musical world, full of animatronic characters.

As we travelled along, we found that the kids loved the vibrant variety of backdrops, designed from paper machè, fabric and glitter.  And as we sailed through each continent, animatronic children dressed in traditional attire sang the song ‘It’s a Small World’ in their native languages.

As we reached the end of the ride all the children returned for a final rendition of the song in chorus.  Warning, the song will get stuck in your head – possible FOREVER.

This ride is perfect for smaller children as it’s not overly noisy and the pace is gentle – a fun, relaxing 10 minute boat tour through all seven of the world’s continents.

Peter Pan’s flight is a ride for all ages where you take a seat in a ship which (with the help of some pixie dust) sets sail into the air and flies over animatronic characters from the Disney version of Peter Pan.

The journey begins with a flight over London (where the kids took great delight in looking down and spotting Big Ben and the Thames) and ends of course in Neverland. But it doesn’t end there – as an addition to the original Peter Pan’s Flight ride at Disneyland, the one at Disney World also includes views of the Lost Boys Camp and Mermaid Lagoon.

This was my favourite ride of the day – it actually felt rather real!

Themed after Disney classic Lady and the Tramp, we ate at Tony’s Town Square restaurant when we were in Magic Kingdom which served a wide variety of reasonably priced Italian food.

Fans of either the movie can try to recreate the spaghetti and meatballs scene with this lovely dish of big, juicy meatballs.

If you’re not in the mood for spaghetti kissing nor inevitably covering your face in bolognese in the process, the rest of the menu is a good, comprehensive selection of tasty and kid-friendly Italian-American dishes.

We all enjoyed every element of our meal. The food was delicious, the kids were well catered for and well attended to, and we left very, very full. Back into the Florida heat.

For this ride, we hopped on a boat and sailed down the river on a mock safari cruise.

The models of alligators, elephants, gorillas and more are great fun to see, but it’s the tour guide who really makes this ride fun. His talk was full of jokes and puns that really kept everyone onboard smiling and laughing.

There are some comical displays too…

As I write this, I can’t believe how much we squeezed in during just a few hours at Magic Kingdom!

Snaking through the streets of Magic Kingdom every afternoon, the Disney Festival of Fantasy Parade is a colourful, fun spectacle with loads of well known Disney characters both old and new for the kids to spot and wave at.  There of course are the essential Disney Princesses (including Elsa and Anna), Mickey and Minnie plus characters from Tangled, Maleficent, Peter Pan and The Little Mermaid and more.

JD and Miss J were sadly too hot and tired to stay out in the 38C heat to watch the full parade, but luckily, there are mini parades that happen throughout the day, so they didn’t feel they missed out too much.

We headed back to our Animal Kingdom Lodge hotel and its inviting pool, hot, exhausted and incredibly happy. 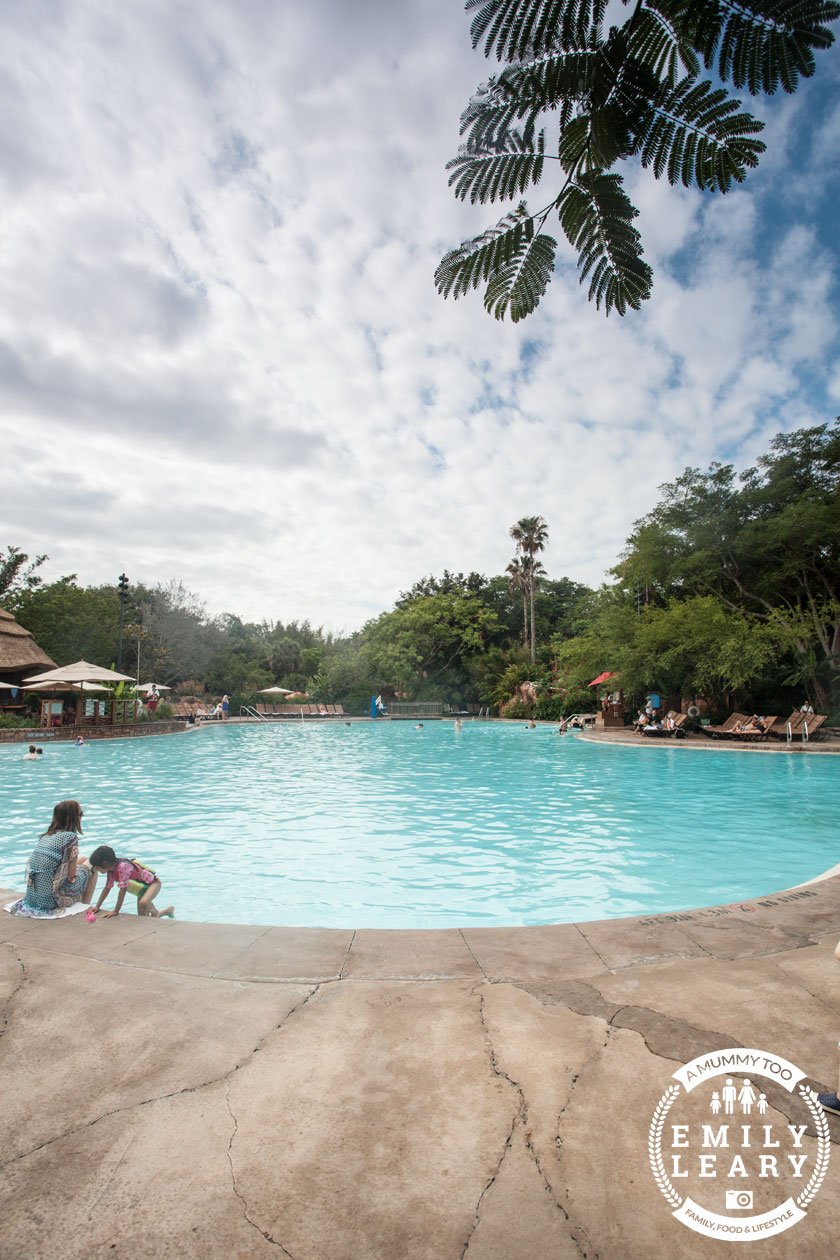 Come back soon for Part 3 at Disney Hollywood Studios!

We visited Walt Disney World on a press trip organised by Disney.

Previous Post: « Blackberry and apple parcels (from the Little Dish Family Cookbook)
Next Post: The Summer Slide: tip to freshen up kids’ learning during the last of the holidays »